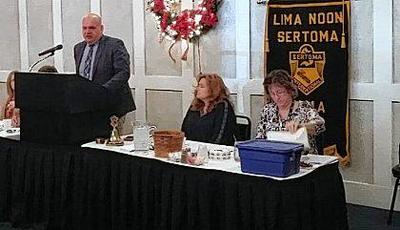 Excerpt from The Lima News

LIMA — While some may view regional campuses simply as offshoots of a distant main campus, these educational institutions have much more to offer.

That was the message from Jay Albayyari, dean and chief administrative officer for Wright State University Lake Campus, at Tuesday’s Lima Noon Sertoma Club meeting at Old Barn Out Back. In outlining the programs offered by the Celina-based campus, Albayyari made the case for why this campus is growing both in numbers and status.

“The purpose of having a regional campus in areas like Celina and Mercer County is that there are a lot of workforce needs over there,” he said. “If you look at Mercer County, we’re big on agriculture and we’re big on industry, with companies like Crown and others. But they need a lot of workers to come over. They’re always looking for people to work. Statistics show that with people who study in an area, almost 60 percent will stay in that area.”

Albayyari also pointed to the campus’ enrollment numbers, showing a 7 percent jump this year, the largest enrollment increase of any four-year degree-granting institution in the state, and a 13 percent rise the year before. Wright State University Lake Campus has more than 1,400 students, 80 percent of whom are enrolled full time. Albayyari pointed to his campus being the only regional institution to offer a bachelor-level engineering program, with the campus also offering bachelor’s degrees in liberal arts, applied technical studies, early and middle childhood education, nursing and more.

Smaller institutions such as Wright State Lake Campus or Ohio State University-Lima can actually have an advantage in this area, according to Albayyari.

“A lot of people desire that smaller environment and smaller classrooms,” he said. “And a lot of people want to stay in the area they are in now.”

New investments in the campus include an Agriculture and Water Quality Education Center, which will open next month, and a third housing building, which was recently completed and is now occupied. Plans are also in place to build an Advanced Manufacturing Center on campus.