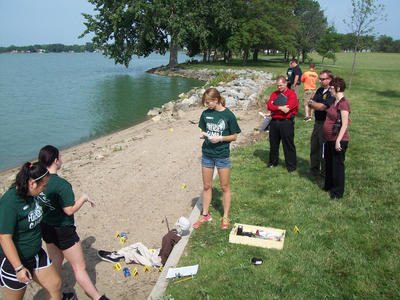 CELINA, OH - The skeletal remains of an unidentified female were found wrapped in plastic on the beach at Wright State University-Lake Campus.  Detectives swarmed the beach collecting evidence, taking photos, and documenting the scene. In this scenario, the detectives were seven high school students attending a Forensics Camp at Wright State University-Lake Campus. Their task: determine what happened in this mock-crime scene.

Dr. Dennis Bulen, Associate Professor of Crime and Justice Studies at the Lake Campus, staged three crime scenes and each team had to process the crime scenes for their final project of the camp.  Detectives from the Mercer County Sheriff’s Department, Celina Police Department, St. Mary’s Police Department and the Ohio Bureau of Criminal Investigation acted as judges.

“It is important that students, who are interested in criminal justice as an educational track and a career goal, have some understanding of what really happens. Television and social media have a huge effect on the perceptions of what criminal justice professionals do. Students need to have some understanding of the differences between the perception and the reality,” Bulen said.

The campers spent four days at the Lake Campus learning how to lift finger prints, sketch crime scenes, collect evidence, cast tire and foot prints, and examine skid marks. “We tried to keep them engaged,” Bulen explained.  “We gave them a short explanation of what we were going to have them do, then we took them out and let them do it.

Bulen was assisted by four Lake Campus seniors majoring in Criminal Justice as they helped the campers understand the concepts and assisted with the activities. The campers looked at crime scenes, triangulated evidence, sketched the crime scenes, and took photos, all while helping them gain an appreciation for the attention to detail is essential into a criminal investigation.

All of the campers expressed an interest in criminal justice as a career at some level. Bulen was very pleased with the inaugural camp. “They all seemed to enjoy themselves and they learned something, “ Bulen said. He is excited to review the camp and make improvements to add to the success for the second camp in 2015.

For more information on this event please contact Dr. Dennis Bulen at 419-586-0300.  Pictures from the camp.