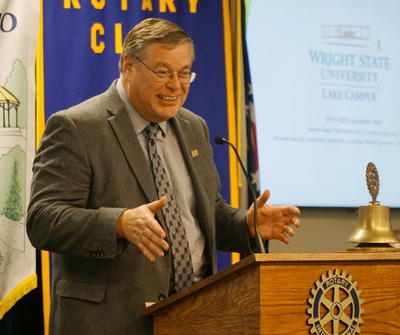 ST. MARYS - Dan Krane, Wright State University-Lake Campus interim dean, said he is adamant about expanding accessibility to higher education and discussed a new program he said would save students thousands of dollars in textbook costs.

As a first-generation college graduate, Krane told St. Marys Rotarians on Wednesday that he has seen firsthand the difference in his life with a college degree compared with that of his parents. He also has no doubt his children are leading very different lives than they would have if he hadn't gotten his degree, and he wants others to see those kinds of benefits as well.

However, he's also aware of the cost barriers students face. He estimated about 25% of college costs were for textbooks and course materials. With the new Inclusive Access system for textbooks being rolled out at Lake Campus, Krane predicted students could save thousands of dollars.

"The Dayton campus has realized savings of over $1 million per semester in textbook costs through the implementation of this Inclusive Access program. It seriously reduces costs of textbooks on the order of 50-70% depending on the classes you're taking," he said.

Traditionally, professors designate textbooks for classes and students must go out individually and buy the materials, whether online or at a college bookstore. Under the Inclusive Access program, the professors instead pass on their textbook designations to the institution, and the university then buys the books for the whole class.

With university officials negotiating on orders, they are often able to get a lower price than students would get individually. Books that might've cost students $235 each can be reduced to $70 each. Students are then given the books at the start of the course and assessed a materials fee.

It's convenient for both the students and professors, Krane said. Instructors no longer must wait a week for students to buy or order their books before diving into materials, while students pay less and have one less thing to worry about.

Krane also gave a brief overview of the growth the Lake Campus is continuing to experience. Despite the main Dayton campus's financial woes, the Lake Campus has done a good job of building a nest egg for itself, he said. Enrollment also continues to increase with a record 1,679 students enrolled for the 2019-2020 school year.

The continued growth was not only a testament to the campus's educational program but also spoke of the value students saw in their hometowns and a desire to stay nearby, he added.

View the original story at www.dailystandard.com.