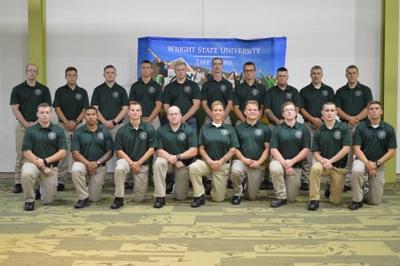 Editor’s Note: This is the first in a series following the Wright State University — Lake Campus Police Academy through their training.

The largest class of cadets to enter the Wright State University — Lake Campus Police Academy are on their journey to graduation as the academy held its first class Monday evening. With 19 cadets registered for the academy, there are plenty of young adults working toward earning the badge.

Over the next eight months, cadets will learn the skills that will allow them to safely and properly serve citizens in every level of law enforcement from small town patrolmen to federal agents. For some, the academy is something they have had their eye on since they were growing up and entered as soon as they could. For others, the road to law enforcement had some twists and turns.

“Growing up, I wanted to go into the military but I never had the family support to go down that career path so I went to school for agricultural diesel,” said 30-year-old St. Marys native Trent Paulus. “I’ve been in that field for the last 10 years and never had my heart into it.

“This is what I wanted to do so I decided to pursue it and here we are.”

As the “grandpa” of the class, Paulus has some additional life experience to bring to the table but he is not alone in the decision to pursue a law enforcement career after trying something else. Cadet Paige Watkins, a graduate of Celina High School, has served her country for the last 10 years as a transportation manager for the United States Army and found she always had a passion for helping her community.

Though Paulus and Watkins may be older than their peers, that doesn’t make them any less prepared for the road that lay ahead. Prior to acceptance into the academy, applicants are screened through an interview process that academy Commander Mark Ernst said helps the cadets secure a job after graduation.

“We get a lot of people who romanticize being a police officer but they don’t realize what it’s going to take and they can come with a misguided desire to be a police officer,” he said. “These cadets will receive more than 750 hours of training, the majority of it is state mandated but some of it is us going above and beyond to make them more marketable once they graduate.”

With so many hours dedicated to learning about law enforcement, there is a guarantee that not every class will be everyone’s favorite. The part of the academy that neither Paulus or Watkins are looking forward to is near the end when they have to take their state exams to be certified by the Ohio Peace Officer Training Academy. Despite all of the work the cadets will put in over the academy, the tests are the final piece of the puzzle for them to be eligible for a career as a police officer.

Though there are things that the cadets are looking forward to.

Watkins said she is most excited for the firearms classes and driving course while Paulus is excited to put his six years of jujitsu training to work during subject control and self defense.

Regardless of what cadets are most looking forward to, one thing is for sure — they will become close with the other 18 members of their class.

“I think it will become — I don’t want to say ‘fun’ but once we get the hang of it and we start to know each other better, it will make it a lot easier,” Watkins said.

View the original story at theeveningleader.com.